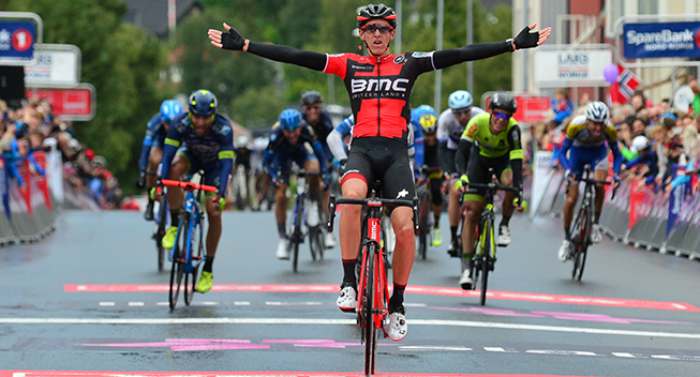 Belgian cyclist, Dylan Teuns has officially recorded his eighth win in just two weeks after being able to get the stage and overall victory at the general classification in 2017’s Arctic Race of Norway.

And while many, along with race’s ambassador and Norawy’s Prime Minister Erna Soberg, who cut the ribbon, were cheering for their local favorite and stage three winner August Jensen from Team Coop, things didn’t go as they wished.

“From the first day, I’ve been scared I was gonna say tuna!’ —@EiselBernhard of @TeamDiData after winning the salmon KOM jersey #ArcticRace pic.twitter.com/eoudY0q840

It was stage one winner and the overall race leader, Belgian Dylan Teuns from BMC Racing team the one able to race under the authentic Scandinavian summer weather the one to win the Sunday’s 160.5-km stage around the island of Kvaløya, and then the overall race.

“It was the best defence I think,”- Teuns told during an interview for Eurosport after launching a solo attack in the final 3 kilometers. Otherwise, I needed to do really good sprint and I think my strength is going on the climb.”

Only three seconds behind…

Teuns, 25, who was able to win by only three seconds over Jensen into the final 3 kilometers, admitted to be aware of this fact.

“I was trying to keep [Jensen] under pressure,” he added “I was also keeping in mind that somebody could go with me, but in the end I was alone and it was quite perfect situation for me.”

Both, Teun’s stage and race victories marked his seventh and eighth victories respectively during the last two weeks

“I’m just in great shape. I can’t explain how it happened. But its good it doesn’t stop because it’s good for my morale.”- added Teuns who was able to get the point’s classification victory, as well as the white best young rider jersey.

aMERICAN eAGLES
vs. tHE wASHINGTON rEDSKINS